I wont lie, it has been freezing this week! However, despite the dry but cold days we have been having, I am still managing to keep to one of my goals for 2013 in ensuring that we go out every day even if it is only for 20 minutes. We haven't done anything special or amazing, just some simple activities which have ensured fresh air and playtime fun!

Monday (in between the showers) and Thursday while Burton was at Ladybirds, where he plays outside anyway, I still took Jenson out for a walk in the buggy but the other days with Burton we did much better.

Sunday we visited my Mum and while she cooked roast beef (yum!), we went for a walk to the nearby park. Daddy hasn't been before so he was pleased to find some climbing walls and set about showing Burton his *ahem* 'spiderman' skills (ha!). Not wanting to be outdone, Burton then decided he wanted to have a go at scaling the wall and after being shown how and falling off twice, he managed to climb up a little way 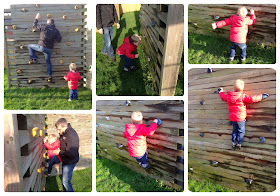 Then without waiting to ask or be shown what to do, Burton decided he would scale the climbing net something he has never done before. Of course I was a little taken aback and I may *coughs*  have slightly worried that he would fall through the holes. But he didn't and he went up and over three times!! 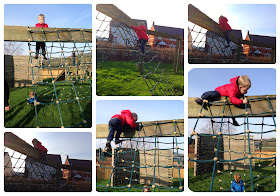 Tuesday was a sunny day and I decided to get the boys outdoors and head to the park as we haven't walked there since we have been living in the holiday home. We did enjoy the park and more climbing was done by Burton, although I did have to help him down despite his protests of me can do it mummy! We also had a brioche and a juice picnic before we set off home and both of them were shivering! It was absolutely freezing and both boys were playing me up a bit to be honest (which is why Jenson isn't wearing his hat as he kept throwing it on the ground!) and pushing them both in the buggy kept me warm though! It was about a 3-4 mile round trip so I was knackered when we got home even if they weren't! 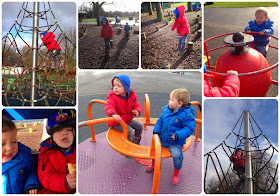 Wednesday we played for an hour in the garden before lunch to work up an appetite which did the trick as for once they ate all their shepherds pie without complaining! 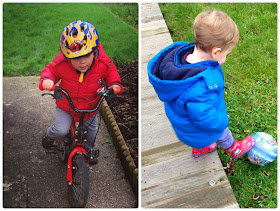 Friday we had some snow - not a lot really but both boys were excited so by 8.30am  (!!) we were outside playing in it. Jenson enjoyed making footprints while Burton played football! Half an hour was all they could stand as the wind was bitterly cold but at least we had some snow play. 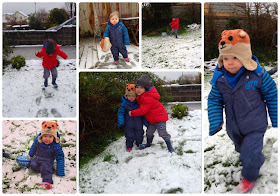 I love to receive comments, so if you would like to leave one please do.
Thank you :)